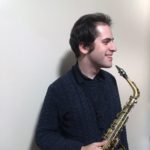 POSTPONED DUE TO STORM: WATCH FOR NEW DATE
Elijah Shiffer and the Robber Crabs are excited to announce the release of their debut album, “Unhinged,” on OneTrickDog Records. Their music builds on the foundations of early blues, Dixieland, and swing, subverting these styles with a punk attitude, a groove, and often a surrealistic edge. It’s sometimes difficult to tell which of their songs are original compositions and which are standards from the 1910s and ‘20s, as some of their originals are in that style, and their arrangements of the standards are frequently highly off-kilter. The Robber Crabs are named after a species of crab that lives on remote tropical islands and can rip open coconuts with its claws.
Elijah Shiffer – alto sax; Andrew Shillito – guitar and banjo; Marty Kenney – electric bass; Tim Rachbach – drums.
Here are 3 of their songs. We think you’ll love them. Material Overture,  That Dada Strain, and Unhinged.
Join PLG Arts at Erv’s, 2122 Beekman Place, just off Flatbush & Maple. Erv’s was a Critic’s Pick in New York Magazine. DNA (now defunct) said: “The best hidden gem this side of Prospect Park….Got you covered with original cocktails (always rotating) and stellar espresso during the day.” And fine Vietnamese food prepared by Quynh. It’s delicious!PLG Arts presents music at Erv’s the third Wednesday of every month. Admission is free!
Add your event to our Community Calendar. Become a PLG Arts member here. FOR MORE INFO: [email protected]
Like us on Facebook!