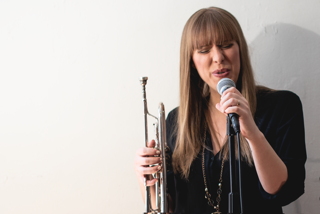 A singer with a unique and deft ability for vocal improvisation as well as a trumpet player with a warm, golden tone, Leala Cyr is a rare “double threat.”  Cyr was a touring member of Grammy-winning Esperanza Spalding’s “Radio/Chamber Music Societies,” with whom she appeared on The Late Show, The Tonight Show, The View, The Daily Show, Jimmy Kimmel Live, Austin City Limits, and more. Her performance at Erv’s on March 20 marks the NYC release of her debut album, “First Instinct.”

Cyr was voted “Best Jazz Vocalist” in the college division by DownBeat Magazine’s student music awards in 2005 and was granted a World Tour Scholarship for the Berklee College of Music in Boston. Appearing with her at Erv’s on March 20 are Elias Meister – guitar, Tiago Michelin – drums, Edu Belo – bass, and Dan Blake – sax.