Pianist/composer Emilio Teubal started playing the piano at the age  of nine. He studied at Argentina’s National Conservatory and was an active performer in the tango and jazz scene of Buenos Aires until 1999, when he relocated to New York City to continue his musical studies.  His latest album, Musica Para Un Dragon Dormido, was chosen as a 2013 best album and has been in the top 100 albums on E-Music.  Joining Emilio are Ignacio Rivas Bixio on drums and Moto Fukushima on electric bass. 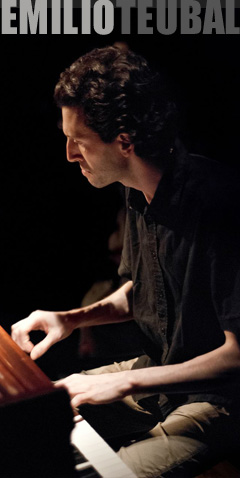 Emilio has performed as a leader in some of the most prestigious venues in New York City, among them Iridium, Joe’s Pub, the Knitting Factory, BAM cafe , Cornelia Street Cafe, and the 55 Bar, as well as at major jazz festivals. In 2007, Emilio was awarded Meet The Composer’s prestigious Van Lier Fellowship, which provides support for talented, culturally diverse young people who are seriously dedicated to a career in the arts.

This Friday, April 25, 7-9 pm, join us for an exciting evening of music when Emilio and his Trio perform at the Ink Well Cafe, 408 Rogers Ave, between Lefferts and Sterling.

Your $5 donation supports the musicians and PLG Arts!

This event is made possible with public funds from the Decentralization Program of the New York State Council on the Arts, administered by Brooklyn Arts Council (BAC).