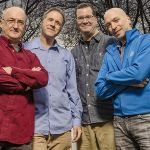 Spin Cycle, led by saxophonist Tom Christensen and drummer Scott Neumann, plays an eclectic blend of hard-hitting original music composed by the members of the band, 4 veterans of the New York City jazz scene who have all recorded as a leader and played in the bands of many well known jazz artists such as Joe Lovano, Woody Herman, Rufus Reid, Toshiko Akiyoshi, Maynard Ferguson, Jack McDuff and Lee Konitz. Formed in 2014, Spin Cycle is a collaborative band that can be lighthearted, serious, funky or abstract but always with a groove and without musical boundaries. A single song might contain influences from modal Coltrane, introspective free jazz, New Orleans funk or the no holds barred energy of punk.